Proposal Overview
Adding support for direct integration with Radar extension, enabling Tally users to add optional protection from scams etc. The feature would be opt-in and extensible to other “wallet apps”. You can read more about radar at our twitter at https://twitter.com/meshedlabs .

Note this is a fresh proposal, with no previous discussions.

We request to build support for integrating with other extensions into Tally, starting with Radar. An added Tally settings panel would control the connection to externally connectable extensions and service workers. This connection would be a communication channel, first passing signature requests (RPC calls such as eth_sendTransaction and eth_signTypedData) allowing for Radar to run a risk analysis on the proposed transaction and second enabling extensions to call Tally for RPC requests.

Timeline
As soon as the proposal is accepted we can start working on development, submitting a PR request in a short [but unknown] timeframe. Better scoping can be done if the initial response to the proposal is positive.

What are the key benefits?

What are the most likely risks?

Risks are minimal because Radar isn’t able to modify the RPC call, but only give its analysis on it. Granular permissions can modify what a wallet app can do. Feature is opt in so users not wanting to use it have no impact. Since future integrations are managed as a proposal, there is no risk of installing malicious apps. 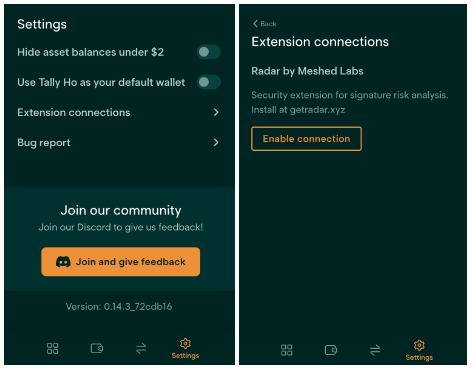 This sounds good but I don’t have the technological expertise to know this. Maybe somebody from the dev team could speak to this for both benefits and possible issues.

Interesting proposal! Doing a little tech diligence to move the conversation along → is Radar open source and something we can audit / review?

Radar has extension code which is open source and an API which is closed.

The extension can definitely be audited and demonstrated that it only intercepts relevant RPC calls (such as eth_sendTransaction) for analysis and does not modify them.

We may be open to an internal audit of the API but are not yet ready to open source that part.

From a security perspective I would feel more comfortable if such add-ons weren’t actually “in-line”, but were fed the incoming RPC data from the dApp and returned data for enrichment purposes that could be displayed to the user alongside the normally displayed information.

dApp sends RPC > Wallet gets it > if relevant for a given add-on sends a copy of the info to get enrichment info > Wallet continues to use the original data from the dApp and can display additional content when relevant.

This would theoretically remove the possibility of tampering.

nice it is so cool my bro